Berlin is a stunning city with it’s sweeping greens everywhere you wander to the very atmosphere found within it – a city steeped in so much history that every street has a story it could tell, yet the vibe is very youthful, a city that is really only in it’s youth in being whole once again.

Considering Germany is the only European country I’ve ever set foot in it wasn’t exactly a bold adventure. This ‘city break’ to my mother’s hometown was truly what was necessary to gain some easy breaths away from the rush that is London.

It was also a chance to re-connect with places I’ve only ever seen through someone else’s eyes and come face-to-face with a city I had only been a bystander in. Yes, it was time to truly see Berlin with fresh eyes.

The weather put on a vivid display of hot, clear, bright days meaning a water bottle was glued to my hand as I walked from my short home in Tiergarten to Bismarck Street and on to Schloss Charlottenburg, which I did in a few hours easily. First documentation of Berlin is linked back to the 13th Century and it has stood as a capital for centuries, while the hands and borders of Germany changed. With such a firm grip on history, there are countless historical places to see and experience, but note that there is also such a vibrant life in Berlin that you could simply spend a weekend engaged in shopping and parties.

The center of Berlin is considered Wilmersdorfer street, which is closed off to traffic and accessable via Bismarck street or Kant street. On Saturday it was buzzing with people, but on Sunday it was all but shut as the shops nor the mall there opens. Charlottenburg Palace is only 10 minutes walk from Wilmersdorfer street and was orginally built as a Summer Palace Friedrick III for his wife and a full pass can be obtained for €15 or a partial pass for €12. Photography is not permitted, unless you buy a pass for a further €3.

You can enter the grounds, however, for free. It is a large fantastic park where the public can have picnics, ride their bikes or simply sit down and enjoy the scenery next to the river or ponds. If walking is not as much your thing then you can get a day card for all three underground zones for €7, its valid until 3am the following morning, handy if you have evening plans with no particular closing time. Another feature of Berlin is the Buddy Bear, seen outside many hotels with it’s arms up or upside down. Created in 2001 as an art feature, they were designed to capture the hearts of locals and visitors alike and seeing them in their variety of displays it is an excellent feature, they are easily visible in many parts of the central city.

The central area of Berlin is extremely easy to navigate and the many ‘traditional’ foods can be found on many of the inner city routes. From the handful of stalls surrounding Potsdame Platz that include Kebabs (Germany’s official most popular fast food choice) to curry wurst with pomme frite (Sausage with curry spices and tomato sauce with a side of French fries for non German speakers) there is an abundance to pick from.

And then theres the Bakeries, filled with a variety of cakes, donuts and quality breads. German’s know how to do bakery food, and well.

One of the biggest symbols of Berlin is the Brandenburg Gate. A location and symbol of history and unification, yet walking in the vicinity of the gate on a sunny Sunday afternoon it doesn’t feel that way.

Yes, it has been splashed across newspapers worldwide in the past and from time to time still, yet the crowds of people from all over the world stand with arms outstretched to capture a shot standing in front of this gate or tower as it’s known in German with smiling faces. They allude in this action, not to the past, but rather to the present of being there in person in front of this landmark.

With the smashing of a wall came a new beginning and Berlin is florishing in this unity. The rest is literal history and while you can remember this history while stepping foot around the city, for now it’s also a city with a lot to do and see for a short or long period of time. A unifed city truly at peace and florishing in it’s new found youth. 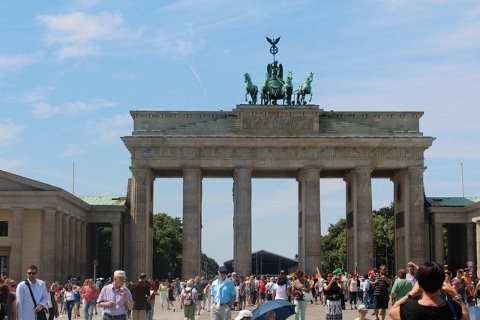 As mentioned the Underground runs until 3am and is an effective way to get around the city cheaply and quickly, here is more information on the lines and costs of the Underground.

If you are on a budget in the German capital than stop by this list to see what free attractions you can enjoy.

Due to lack of time and catching up with old friends I could not personally make it on this visit to the Berlin Wall memorial, but this is definitely a site worth stopping at while in town.

If you have time to escape to the zoo, the Berlin zoo is a large park worth visiting.

Seeing a relic of damage from World War II is an easy feat in Kaiser Wilhelm square where the Memorial Church remains as a symbol of the destruction that Berlin underwent during this horrific war.

Down from the Brandenburg Gate is a line of trees that can be found decorated for special (and not so special occasions) called Unter den Linden, it is a beautiful sight to walk underneath.

German parliament sits in the Reichstag building, a site worth stopping for.