Chicago – Chitown and the Windy City 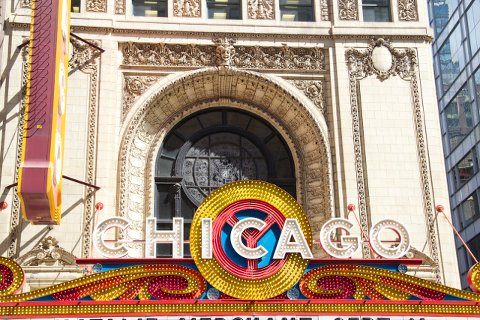 Chicago rumbles with people and trains that roll over the streets, it rumbles with wind that comes off a lake so large you cannot see land on the other side. It’s a city with an accent not all unlike New York or Boston and it’s soul is the third largest in America. Yes, its Gotham roots are evident when you walk downtown, dwarfed by the skyscrapers with the wind whistling down the streets with a  proverbial color of gray, until the skyscrapers clear and the path leads to the wide lake and you turn around to see the skyline that isn’t so dark or dreary or even gray after all.

Founded in 1833, the history of Chicago (and it’s name!) stems back to a time when Native American’s called this area home and it was known for the wild garlic that grew. In fact the name is derived from a French rendering of the Native American word ‘shikaakwa’ for ‘wild onion,’ ‘wild garlic’. The French explorer Henri Joutel first encountered the word Chicagoua between 1684 and 1688 when he investigated the flora and fauna of the region. Needless to say, it was a winding road from shikaakwa to Chicago and history is kinda fuzzy on how they got to it’s final name. 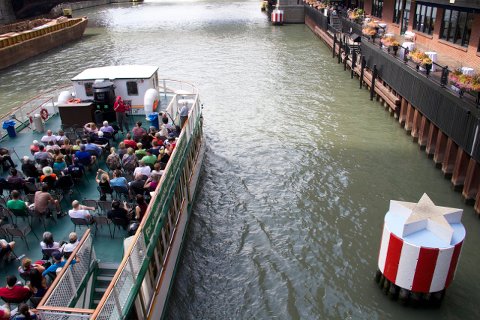 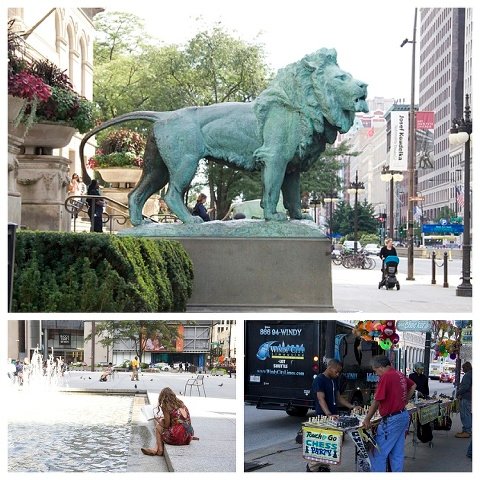 It could be from the tapestry of mafia, Native American’s, the ash from a great fire or it could be that the ancestors of this city needed to be tough thanks to the harsh winters and hot summers. I couldn’t put my finger on how it feels to be in Chicago. Sometimes you have all the answers of that vibe a place gives off as soon as you breath in it’s air and are confronted with it’s people.

There are moments of chaos, of course, this is a large American city and the largest in the Midwest so there is a lot of business and a lot of life that exists here, but somehow even in the craziness there were moments of silence. I have never seen so many homeless people reading books in my life, there is a mirrored bean that attracts crowds from all directions and that subway line, casting a shadow on the streets, yes, people are a little harder to pinpoint here. 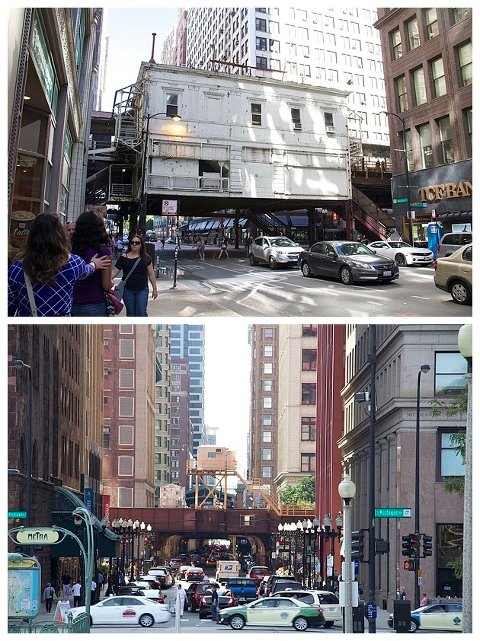 The Chicago Loop from the street

Stepping off the L train to walk towards Millennium park on a glorious summer day meant the crowds were plenty on this Saturday, even more so because there were several Mexican girls celebrating their Quinceañera. Dressed in full bodied, bright dresses with colorful companions all reflecting back on that bean where tourists held up cameras for a shot. Having lots to do we continued wandering through the park, past the outdoor theater and the interactive fountain. Buzzing with kids cooling off from the heat its hard not to sit down and stay a while in the park, it feels so comfortable to stay a while.

Sitting down to a deep dish pizza before our night truly, this dish isn’t pretty when it’s on your plate, but boy does it taste good and the greatest feat of the deep dish is how much tomato sauce can be put on a pizza. It may not be pretty and you almost certainly couldn’t eat one by yourself (four of us shared one quite contentedly), but it’s a must in the city of ‘deep dish.’

Walking along Buckingham Fountain as the sky turned pastel overhead it was the perfect time to see the water light up with the skyline in the background. Than it was over to the edge of Michigan Lake to see the sky turn dark and in the summer there are fireworks every Saturday from Navy Pier, yes, Chicago can romance your socks off with delights. 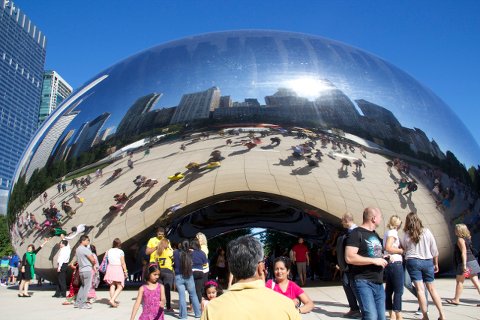 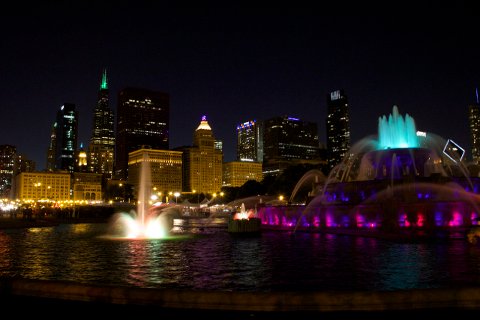 After going to a free summer concert we continued our night dancing on the sidewalk to a busker and continued the fun at a Cuban restaurant where the night lasted until the sun almost rose. Needless to say my lack of sleep allowed for less sightseeing the next day. It was back to walking beneath the skyscrapers and getting to see the Chicago river from the several bridges that cross it. It’s a city of films for me so getting to stand there on those bridges and seeing the ‘Chicago Sun Times’ building made me feel twelve again and I felt awed that I was there, this place where so many movie scenes had passed by my eyes growing up. 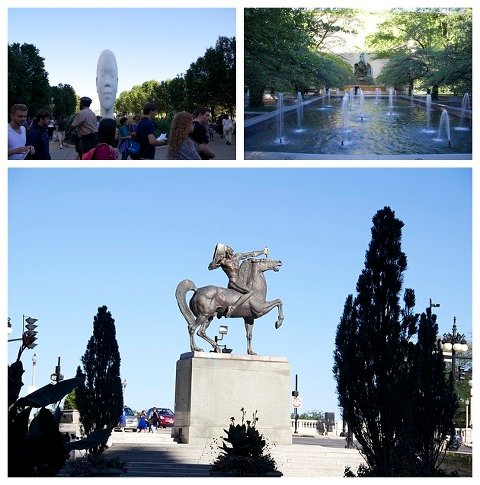 The free spaces capture your attention

Having a stern warning from my friend that I cannot visit Chicago without tasting Garrett’s Popcorn I took myself there and ordered the Chicago mix – half cheese and half caramel flavored popcorn tossed into a bag. It was difficult to stop eating this and had it not been half a gift for her (it became half a gift once I ate two of them and couldn’t stop, you’ll see why and trust me we all say “I’ll just have one more’) I would have consumed the whole bag in one sitting.

Yes, it’s a city that needs to be seen and experienced beyond just Michigan avenue, theres so much to see and do and I have a list of things for the next time I visit. Chicago probably couldn’t be a city you visit just once, there’s too much to see and too much personality to resist returning to. 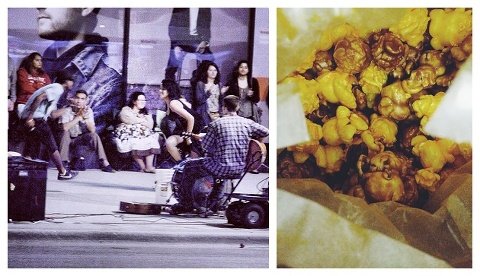 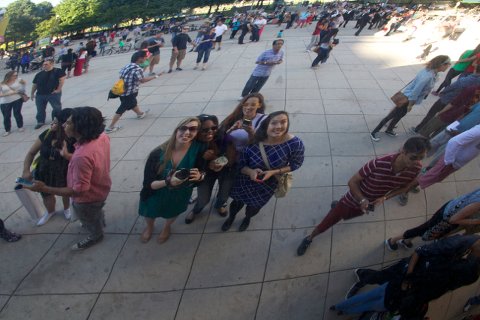 Bunch of tourists at the bean 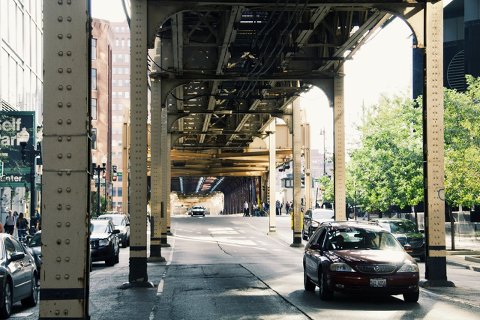 Under the L where Batman once stood

Tips:
Here is the general information site for the city.

And if you are not sure what is happening during your stay than Choose Chicago is very helpful.

If you’re over 21 than get yourself to the John Hancock tower for a cocktail or three as the sights are magnificent of the the skyline and that vast lake.

Like Michigan Avenue and Deep Dish Pizza, Navy Pier is a Chicago institute that is worth a visit.

The Chicago river is a place where you can get below the ground level and see the city in a way that cannot be seen on foot (unless you kayak the river) so a boat tour is recommended.

If baseball is your thing than the Cubs are one of the most famous teams in America.