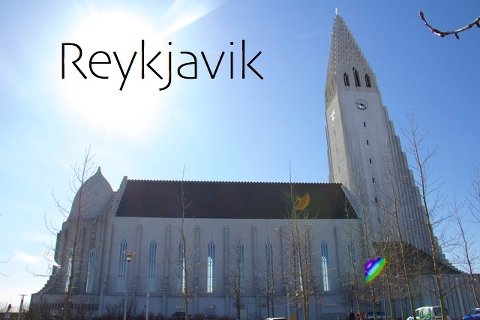 My journey to Reykjavik began on Icelandair with an evening flight that allowed the national airline to show off it’s special ‘northern lights’ feature as we flew ever closer to this island nation’s shores and a mixture of local artists played over the airwaves as we boarded and departed.

Landing at midnight with a glimmer of orange still hovering in the sky in early May and temperatures hovering just above 0ºC, it wasn’t as icy as we predicted. The airport lies 40 minutes drive away from downtown and there is always a bus (a much cheaper option than a taxi and there whether your plane is delayed or on time) to pick you up and drop you outside your hotel or hostel.

The northern most capital on earth is the kind of city with a soundtrack that is as relaxed as the people who inhabit it. This city where it snows more than it’s fair share and cold dark nights stay longer than more of us could tolerate, yet the people are incredibly friendly and relaxed. The local music by the musicians who call this city home are a perfect example of us as the tunes stream out of the local stores downtown. All these little pieces make it hard to put into words quite how much I fell in love with this city. 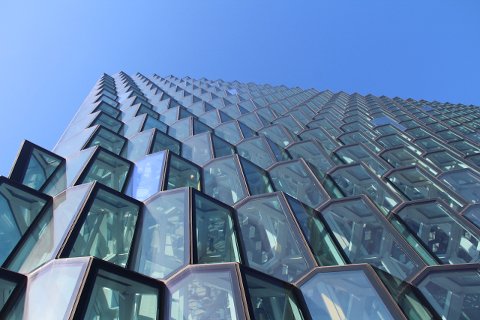 The honeycomb of Harpa 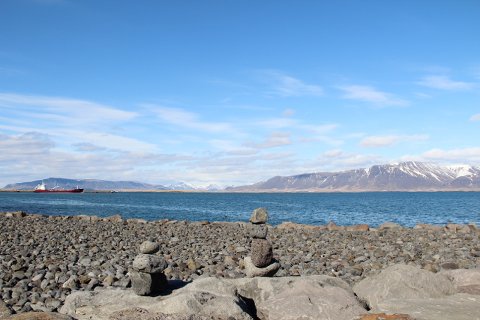 View to the mountains

This is a city with a widening mixture of locals  and other intrinsically cool people who have chosen to make their life here whether for studying, business or a fresh start. Despite the fact it snows more than it’s fair share and cold dark nights stay longer than more of us could tolerate, everyone is so incredibly friendly, relaxed and welcoming with their impeccable English. 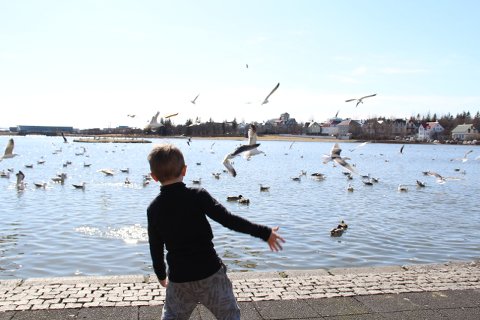 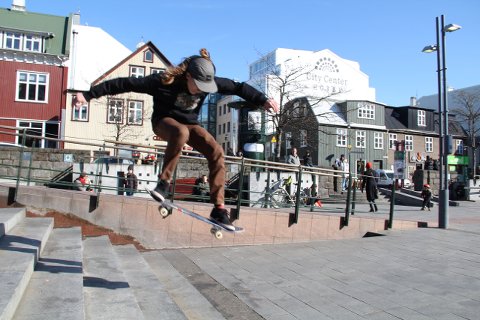 Leaping over the stairs

Reykjavik has a history that dates back to 870 (though a more informal history notes that the Papar were here earlier) when Ingólfur Arnarson, decided to settle his family in the location where the informaton center stands today. Reykjavik was named thanks to the geothermal activity in the area which translated means ‘Smokey Bay’ and so it’s still called this over a thousand years later. 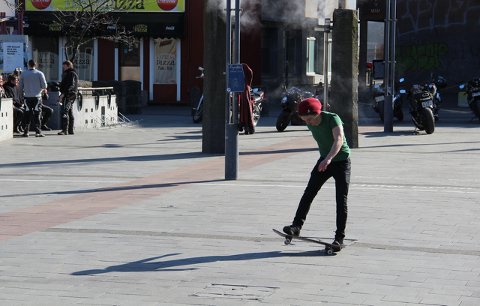 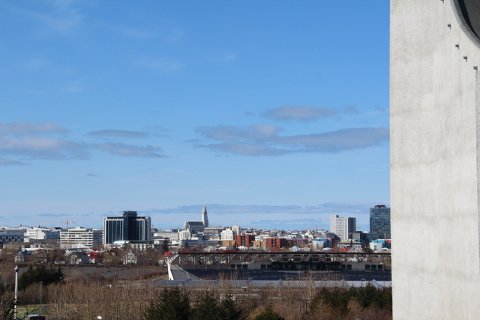 Reykjavik’s downtown, though small (this is a city of only 120,000 people after all), has a lot to offer and plenty of places to eat. The energy that we met in the early May atmosphere was thanks to a bright and clear sky above us and a national holiday filled with young families, people finessing their skateboarding skills and lots of obvious tourists. It’s no wonder the atmosphere brings a smile to the face and lets it it linger. 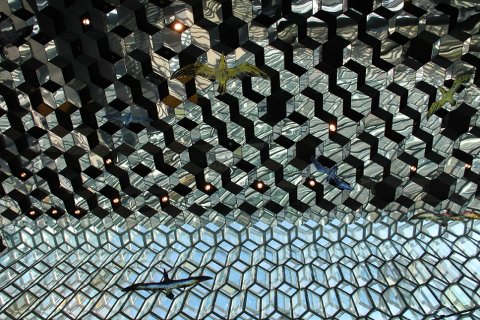 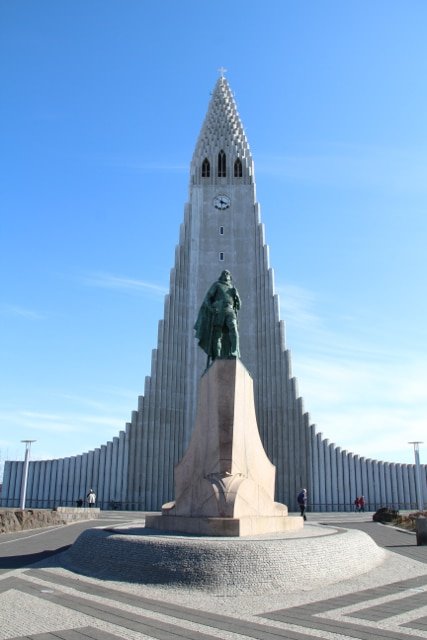 At the base of the cathedral

While there don’t forget to try a Kleinur or two, though not original to Reykjavik or Iceland, they have been embraced by the locals. These twisted donuts with a slight hint of ginger and best served warm they are the perfect little warm up treat.

And if you see a sign for good tacos that leads to an alley then set out on the detour, the American chef at Tacobarinn made the best tacos I’ve had since my last visit to the States. And of course, you cannot visit without trying a hot dog, though be prepared to stand in line. 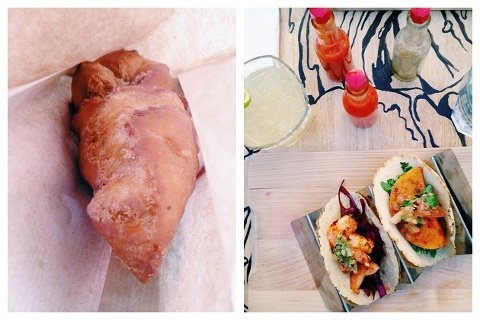 The best advice I can give regarding this beautiful city is to simply get out and explore, even if there is hail and a swift wind blowing, it’s best to ignore and continue on or have a five minute break inside the Harpa building which is so incredibly worth stopping into.

This capital won’t be much like the bustling capitals you’ve likely visited before, but there is something incredibly unique about this city and its inhabitants that will make you yearn to come back here after your departure. Reykjavik is a pretty special place. 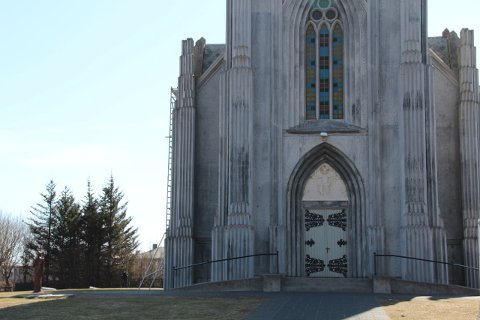 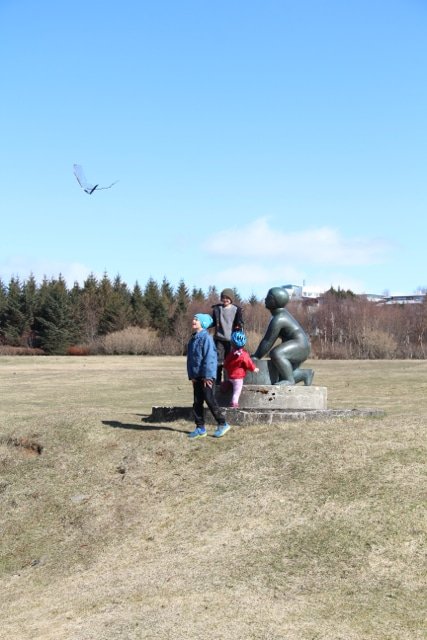 Your first stop for visiting Reykjavik should be here.

Icelandic currency is Krona and Iceland is known as being rather expensive.

For information of the Flybus into the city, here is the website.

Only 15 minutes from the airport lies the Blue Lagoon, surely a stop during your visit and make sure to allow a few hours as it’s worth it.